Ghost is taking full backup and breaking my backup chain . Be careful with Azure VM backup on VM having SQL server installation

I believe that I have strong knowledge in SQL Server backup and recovery process, but recently there was an incident which shook my confidence. I was working on a migration for a noncritical production server from SQL server 2008 to 2017. As we need to upgrade the OS also, we decided to go ahead with the side by side migration. The backup plan on the existing server was full backup on a weekly basis. So I decided to restore the previous week's full backup well in advance and during the migration window to take a differential backup and apply that on the new server and I communicated this process will take approximately 15 minutes. As I was pretty confident in this process, I didn't put any effort to do a dry run prior to the migration day and everything set for migration.
During the migration window, as a first step, I fired the command to take differential backup on the existing server. To my surprise, it throws the following error:
Msg 3035, Level 16, State 1, Line 1Cannot perform a differential backup for database “Mydatabase”, because a current database backup does not exist. Perform a full database backup by reissuing BACKUP DATABASE
I was not able to believe this. Immediately I queried the backup set table and I saw multiple full backup records after the previous week full backup. I ran a set of queries and it revealed that some backup operation is happening without DBA's knowledge to a virtual device at a regular interval. As per the Microsoft documentation, Device_type 7 is a virtual device.

I don't have time to dig further, I continued the migration by issuing full backup and restoring the same. This delayed the entire migration process by 3-4 hours and it was an embarrassing situation.
After the migration, I decided to figure out the issue and went ahead and searched the SQL error log and I found the following messages along with the backup message.

The I/O frozen error was just before the backup and that triggered me to think about disk snapshot backups running behind the scene and contacted the infra team to understand this. On contacting them, they told me that, they have enabled the Azur VM backup on all VM on a daily basis and the Azure VM backup schedule on the server in question was matching with the above error message. With that, we were sure that the azure VM is the culprit behind this ghost SQL server backup. On reading further on azure VM backup, we learned that Azure VM backup uses the VSS (Volume Shadow copy) service to take the backup and SQL server is a VSS aware application and it takes a full backup of  SQL Server databases using SQL writer service. Before taking backup, it will freeze the disk operation to get a consistent backup.
What is VSS backup?
Volume Shadow Copy is a technology included in Microsoft Windows that can create backup copies or snapshots of computer files or volumes, even when they are in use. It is implemented as a Windows service called the Volume Shadow Copy service. It allows backup applications to safely back up locked and open files.
Components of VSS:
Finally, we understood what was happening behind the scene and decided to stop the backup operation initiated by the Azure VM backup as DBA's are responsible for SQL server backup and recovery. We can not stop the Azure VM backup as the infra team need this for recovering the instance in case of disaster. So we found two solutions.
I hope this piece of information will help you one day. If you are more curious about VSS service, refer the below links:

Service Tier: Like in the DTU model, the vCore model also provides multiple service tier to match with your performance requirements and budget. vCore purchase model provides the following service tiers.
General Purpose :
Hyperscale :
Business Critical  :
Compute Tier: Under the service tier,  azure SQL server provides the compute tier. For managed instance and elastic pool deployment models, azure provides only provisioned compute tier and this option will not be available to choose. For the single database deployment, there is one more additional compute tier called Serverless. Let us see the difference between these two compute tier:
Provisioned :
Serverless : 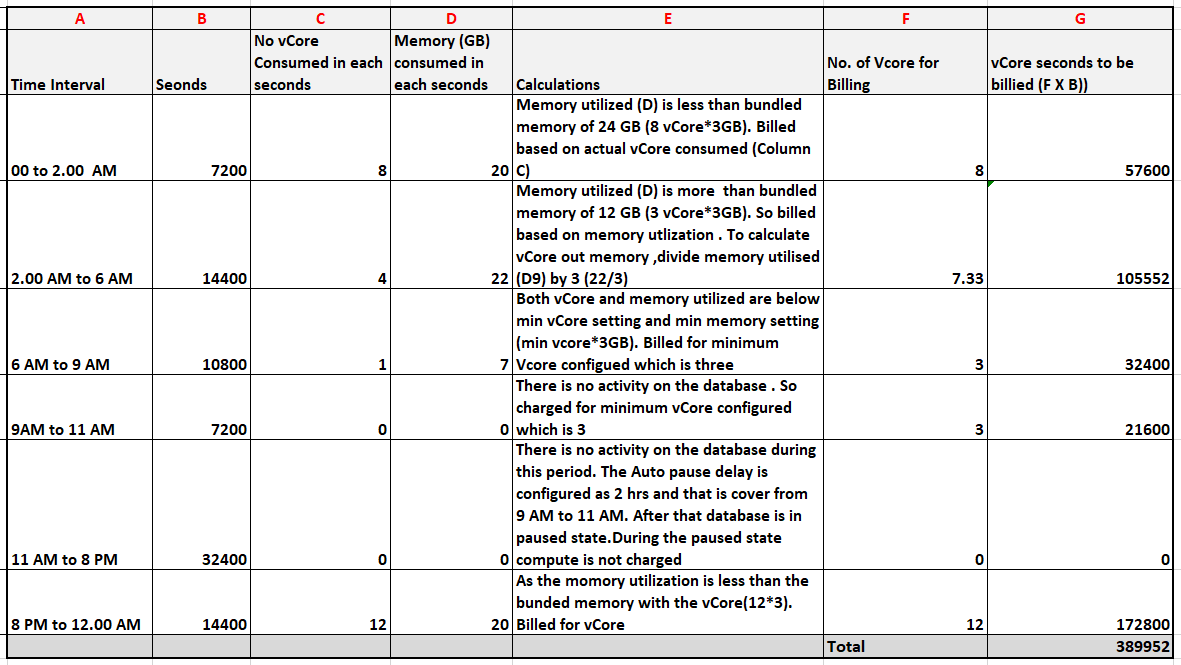 The total vCore seconds are 389952 and it will cost 56.54 USD (0.000145 USD * 389952 vCore seconds) for the workload mentioned in the above table which spread across 24hrs.
Apart from connecting to the database, there are many other events that resume the database from a paused state. You can find those events in the Azure documentation page
Hardware Configuration Azure provides multiple hardware options to choose from under the service tier. These options differ from region to region. Commonly available hardware options are
The below diagram provides you a visual representation of vCore purchase model options for Single database and Elastic pool.

Managed Instance deployment model also provides General Purpose and Business Critical service tier. Under the service tier, it provides Gen4 and Gen5 hardware.
Each combination of these options has many other characteristics like tempdb space allocated, log space allocated, IOPS, no of concurrent session, log write throughput, etc.   All those detailed information can be found in the following Azure documentation.
I hope, this post helped you understand the vCore purchase mode in detail.

Posted by Nelson at 06:46 No comments: Links to this post

Each service tiers in the elastic pool has a limit on the individual database resource utilization. The below table explains those limitations:

In case if you are migrating your workload from your on-premise installation of SQL Server to Azure SQL and you are not sure how much DTU need to be allocated and which service tier to be provisioned, DTU calculator comes handy. You need to provide values of the following performance counters :
I hope with this you got a good understanding of the DTU and eDTU purchase model.  In the next post, we will cover the vCore purchase model.

Posted by Nelson at 02:51 No comments: Links to this post

Recently I started working with Azure SQL Database. It took some time for me to understand the concepts of the Azure SQL database. Earlier I have experience in AWS RDS for SQL server, but in Azure it works in a little complex way. Once you understand the different offerings, security, deployment model, etc, it is is easy to provision the resources as per the requirements.

Microsoft Azure database is a fully managed platform as a service (PaaS). Azure provides three different deployment options to cater to the different needs of the customer.

Let us look into the details of each deployment model :

Managed instance is placed inside the Azure virtual network and in a dedicated subnet. This provides :
Managed instances also provide public endpoints. Public endpoint provides the ability to connect to the Managed Instance from the Internet without using a VPN. Access is disabled by default unless explicitly allowed. We need to explicitly whitelist the IP address to access through the public IP address.

managed instance provides two flavors of compute and storage :
Managed instance also support to bring your own license with software assurance (SA). Considering all these, managed instances are the best option for lift and shift of your existing workload to the cloud. Note that, if you need direct access to OS/filesystem or dependent on a specific version of SQL server or required specific features that are not supported in the Azure SQL server then Azure Paas database service is not suitable unless you resolve those dependencies.

Single Database:  A single database is a fully-managed database as a service (DbaaS) under the Azure PaaS offering. This deployment option is most suited for modern application development like microservices. The single database deployment option creates a database in Azure with its own set of resources and is managed via a SQL database server. With a single database, each database resources are isolated from each other. A SQL database server is completely different from the SQL server that we used to have in the on-premise installation. In this context of azure DbaaS, an SQL database server is a logical construct that acts as a central administrative point for one or more single databases.
In short, Single database support only database-level features and does not support server level features.  To migrate your existing workload to a single database,  there are three primary methods.
Azure database server does not allow you to host inside the Vnet. By default, the access is through the public endpoint.  All the traffic through this endpoint is blocked and you need to explicitly whitelist the required IP address to connect to the database server through this endpoint. There is no option to disable the private endpoint but as mentioned earlier, no one can connect through public endpoint unless you provide the access by whitelisting the IP addresses. You can enable the private endpoint by integrating virtual network private endpoints. Private endpoint helps to connect from the same VNet or peered VNet in the same/cross-region or from on-premises using a VPN.  Note that virtual network private endpoint will be billed separately

Azure Database provides two types of purchase :
Users can select the option based on their workload. In the vCore model, azure allows you to bring your own license. We will discuss these options in another post.

Elastic Pool: Elastic Pool Is a set of single databases with a shared resource pool. In a single database, each database will have its own dedicated resource. In the elastic pool, resources are configured in the pool level and each single database connected with that pool shares the resource of elastic pool. SQL Database elastic pools are a simple solution for managing and scaling multiple databases that have varying and unpredictable usage demands. For example, let us assume you are providing some SaaS solutions to multiple clients in different time zone. Each customer data are stored in independent databases. In this scenario, the resource can be utilized in a much better way by adding those databases to the elastic pool instead of allocating dedicated resources to each individual customer database. Apart from this, the rest of the characteristics are the same as the Single database mentioned in the above section.

Hope the below pictorial representation helps you to understand different deployment option available in Azure DbaaS. 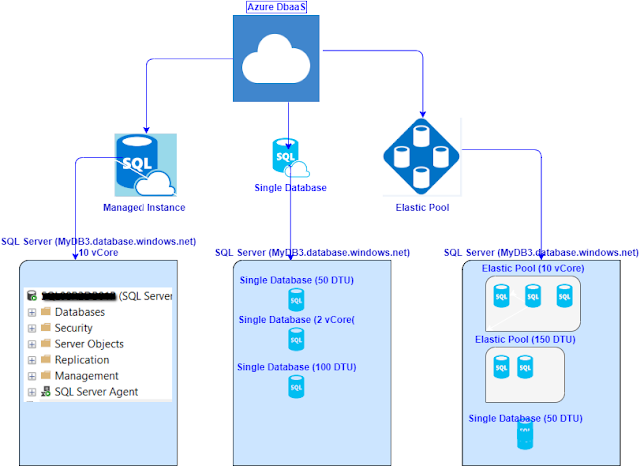