In the Part 1 about SQL server Statistics, we have discussed about density vector information stored in the the statistics. In this post, let us discuss about the histogram. Let us create a copy of SalesOrderDetail table and two indexes on top of that as we did in our first part.

Let us see the histogram information of the non clustered index. 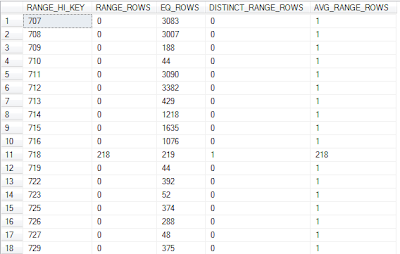 Let us look at the output of the histogram. It tried to put the 121317 records in the table into 200 buckets (steps) based on the value of productid.

SELECT COUNT(*) FROM SalesOrderDetail WHERE productid>716 AND productid<718

SELECT COUNT(*) FROM SalesOrderDetail WHERE productid=707

How SQL server optimizer use the histogram for cardinality estimation ? Let us consider the execution plan of the below query.

SELECT productid FROM SalesOrderDetail WHERE productid>=716 AND productid<=718

From where the Estimated Number of rows (1513) is calculated ? Let us go to the histogram

Sum of these three values is the estimated number of rows in the above execution plan.


When there is complex where condition ,optimizer create required statistics called column statistics and use complex algorithm on top of the histogram data for cardinality estimation. We  will discuss about that in the next post.